David Jean-Baptiste was a teacher at our school, St. Mary Magdalen.  His mother is a member of St. Bernadette parish which is responsible for St. Mary Magdalen.
We want to seek out some resources for violence prevention.  We are interested in peaceful approaches such as those sponsored  by Pax Christi International to bring programs for young people to avoid gang life. Anyone having information or connections, please e-mail Tom Luce: <hhecoordinator@gmail.com>. We also want to seek funding to support this peace effort.  You can use the DONATE button below by indicating your support for the peace movement. We have submitted a proposal to  Peace Development Fund to resolve gang violence through peaceful means. We call it "Peaceful Youth Empowerment -PYE  HOWEVER, PDF has told us we have not been chosen. Help us think how to fund such a vital project!  You can download our proposal by clicking here PYE PDF
Below is a slide show with more pictures.  Please be forewarned that these are very disturbing pictures. 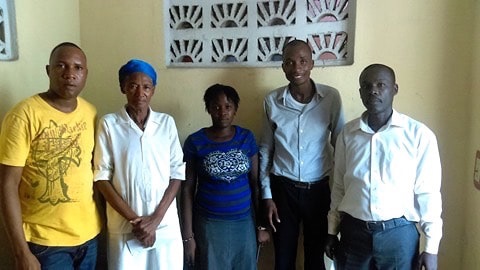 Dec. 8, mother and fiancée of David Jean-Baptiste meet with HHE reps to receive financial assistance from St. Columba for funeral and support for dealing with the gang issue in a peaceful way. L-R Gentilhomme Jean-Gilles, David's mother, David's fiancée, Jean-Ernest Point-du-Jour, President of the Community Human Rights Council and Hailé Noël, Principal of Mary Magdalen school.
GRAND RAVINE  MASSACRE, NOV. 13 is a POLICE "BLUNDER"-- AT SCHOOLYARD OF THE MARANATHA EVANGELICAL SCHOOL, BOLOSSE SECTION, by Tom Luce
(note: check  below to find my sources of information, some details are still unavailable. My sources have been many articles from, Le Nouvelliste, Agence Haïtienne De Presse, Haïti Liberté, Haïti Libre, LOOP, Rezo Nodwes and local people.)


1. VICTIMS;
2. CALAMITY DETAILS;
3. NOV. 20, OFFICIAL INQUIRY OF PNH BY SENATE COMMISSION, FOLLOW-UP
​4. HHE CALLS FOR PEACEFUL SOLUTION TO GANGS: "PEACEFUL YOUTH EMPOWERMENT", on the 8th anniversary of the massive earthquake in Haiti a proposal to the Peace Development Fund was made.  Click here PYE PDF to read our proposal.
5. COLLECTION OF PUBLISHED REPORTS....


1. VICTIMS: 2. CALAMITY DETAILS 3. Nov. 20, OFFICIAL SENATE INQUIRY OF PNH: REVEALS SEVERELY CRITICAL FACTS, RESULTING IN CALLS FOR AN INVESTIGATION OF THE PNH AND PROSECUTION OF THOSE RESPONSIBLE FOR THE MASSACRE:  After a week of protests from school officials with the Baptist mission, other Protestant groups, teacher, school and human rights groups, and former PNH General Director, Mario Andresol, the current officials of the PNH were called to an inquiry- 11.20.17 - by the Haitian Senate Commission for Justice, Security and National Defense, Chaired by Senator Senatus. 4. THE HHE MINISTRY OF ST. COLUMBA, HopeForHaiti:Education  has sent a message to the Principal of their Catholic school, Mary Magdalen, saying that it wishes to join the interfaith, human rights groups who have called for an investigation of the massacre including the role of police. HHE, already committed to supporting the education of impoverished Haitians so that they can live and contribute to a just Haiti, also wishes to contribute to the solution of "gang problem" in a peacemaking way that has been done elsewhere in Port-Au-Prince through engaging vulnerable youth in positive activities like sports and gardening.
On 1.12.18, the 8th anniversary of the massive earthquake in Haiti, HHE submitted a proposal for $5000 to the ﻿Peace Development Fund﻿. The proposal is called, "PEACEFUL YOUTH EMPOWERMENT"*. This money would be used by our catholic school, Mary Magdalen--principal, Mr. Haile Noël-- to hire and equip a community organizer to bring a new Grand Ravine coalition to work at resolving the issue of gangs.  This has already been accomplished in the once infamous zone, Cité Soleil, by a program called "SAKALA". Another program, "Those Angels" in another once-gang ridden zone, Carrefour, that a local Oakland Haitian-American is working with, will also be studied to help the new Grand Ravine coalition create their own "PEACEFUL YOUTH EMPOWERMENT-PYE"  See our PYE proposal by clicking here: PYE PDF
5.  PUBLISHED REPORTS:  The following reports have been translated from the French by Tom Luce taken from Haiti Liberté, Haiti Libre,  Le Nouvelliste, Agence Haïtienne de Presse, LOOP, Rezo Nodwes, and MagHaiti.  The complicated nature of this massacre on Nov. 13 is filled out, but not resolved yet, in these reports. Follow the "update" section above.  The role of gangs and government officials is speculated on and there is much discussion throughout Haiti about the growing repressive actions of the police and  of the newly revived army.  More articles to come!

Articles With Critical Information After Nov. 13