You can now donate online to HHE by clicking the icon above. NOTE: C-19 has forced us to cancel fundraising events so we now depend on online donations.

Download File
1. STATEMENT OF SOLIDARITY:  HHE has sent out the following brief message in Kreyòl to our partners/friends in Haiti and other places here in the U.S.condemning the reported insults of President Trump on Thursday, 01/11/18:
Dear Sisters and Brothers:
On behalf of the HHE Committee, I want to say that we believe that the remarks of President Trump  last Thursday against Haiti, Africa and Latin America were totally racial and terrible.
We want you to know that we appreciate all Haitians, all Africans  as well as Latin Americans including those here in the         USA. They are  totally worthy of respect.
We give you our deepest regrets  for these  totally unacceptable words from our president.
Know that we love you!
Sincerely,
Tom Luce, HHE Haiti Liaison         Note: click on the "ijdh.doc" above to read a formal solidarity letter we have signed on to.
-------------------------------------------------------
Che Zanmi,
Nan non Komite a HHE, mwen vle di ke nou kwè ke remak yo nan Prezidan Trump Jedi pase kont Ayiti, Afrik ak Amerik Latin yo te totalman rasyal ak terib.
Nou vle ou konnen ke nou apresye tout Ayisyen, tout Afriken kòm byen ke Ameriken Latino ki gen ladan sa yo isit la nan USA a. Yo totalman merite pou yo respecte.
Nou ba ou regrè pwofon nou yo pou pawòl sa yo totalman inakseptab nan men prezidan nou an.
Konnen ke nou renmen ou!
Senseman,
Tom Luce HHE Ayiti Lyezon
=============================
​2. GRAND RAVINE NOV. 13 MASSACRE--POLICE "BLUNDER"-- AT SCHOOLYARD OF THE MARANATHA EVANGELICAL SCHOOL, BOLOSSE SECTION
by Tom Luce (note: for an update and  to find my sources  of information some details are still unavailable.  Click HERE.​ My sources have been many articles from, Le Nouvelliste, Agence Haïtienne De Presse, Haïti Liberté, Haïti Libre, LOOP, Rezo Nodwes and local people.) 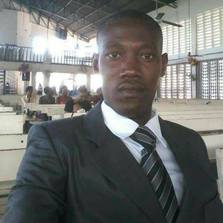 David Jean-Baptiste, a teacher at our school, Mary Magdalen in Gran Ravin, was killed on Monday, 11/13/17, in a mini-war between gangs and police that was carried on at another school, Maranatha Evangelical College, also in Grand Ravine, Bolosse section. The principal of another of our schools, Brother Mareus and another teacher were beaten severely.  Another school, Orion, was also disturbed by the violence. No killings or injuries were reported at Mary Magdalen.
We collected $750 to help Mr. Jean-Baptiste's family and his fiancée (they were to be married in December) with funeral expenses. Funeral expenses are estimated at $1,750. The funeral has been postponed for lack of funds.
David is pictured here at St. Bernadette parish church, the parish that sponsors Mary Magdalen school. His mother is a parishioner there.  It is the parish which sponsors the Mary Magdalen school in Grand Ravine.
We want to seek out some resources for violence prevention.  We are interested in peaceful approaches such as those sponsored  by Pax Christi International to bring programs for young people to avoid gang life. Anyone having information or connections, please us the form below to communicate with us!  We also want to seek funding to support this peace effort.  You can use the DONATE button below by indicating your support for the peace movement.
Below is a slide show with more pictures.  Please be forewarned that these are very disturbing pictures.

3. Hurricane "Irma" struck Haiti's north heaping floods and winds that have destroyed whole towns and crops.  100,000 people have been displaced in the north.  People in Haiti haven't recovered yet from last year's "Matthew".  Our coordinator Gentilhomme Jean-Gilles is from the north city, Port-De-Paix and has sent us a video.  You can see the video at https://youtu.be/dqQ4WMP51Hk
​Here is a still picture of the flooding in Port-De-Paix.  If you would like to donate to help Gentilhomme's people--he says they need clean drinking water--click on the button here below.   Haiti is still suffering from a cholera epidemic.  DONATE: financial help is still needed especially after Maria.  Click on the button below to give a gift. 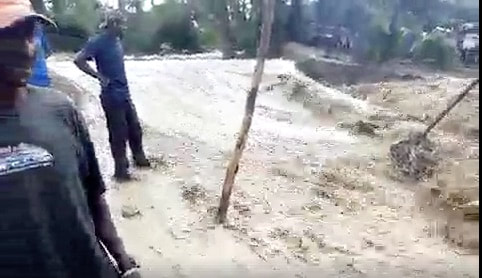 Port-de-Paix, 3rd largest city in Haiti, 462,000, at north with the Isle La Tortue opposite in the Caribbean..
4. Budget Protests: The Haitian legislature passed the proposal for a new budget written by Pres. Jovenel Moïse. According to the news site, HaitiLibre, critics from social justice groups said, "...This law will break the country into the hole of social inequality, misery, great corruption and injustice." See article at HaitiLibre. Former Senator Moïse Jean-Charles called for a national protest. (I worked with him in '05 when he was organizing protests after the removal of President Aristide against the US backed new Prime Minister Latortue.) It started on Monday, then all day Tuesday when some violence erupted. Tens of thousands marched--acording to Agence Presse Haïtienne. Some car tires burned, some store windows broken. One man killed. Mr. Jean-Charles apologized for the damage. The police began to arrest him, but several members of parliament shielded him.   Our contact there verified the basic peacefulness of the protests.  Mainstream news emphasizes the violence.  Go here to see our first hand brief video of the march where Mr. Jean-Charles--in blue shirt-- is protected. youtu.be/V7oia6R_45g﻿ 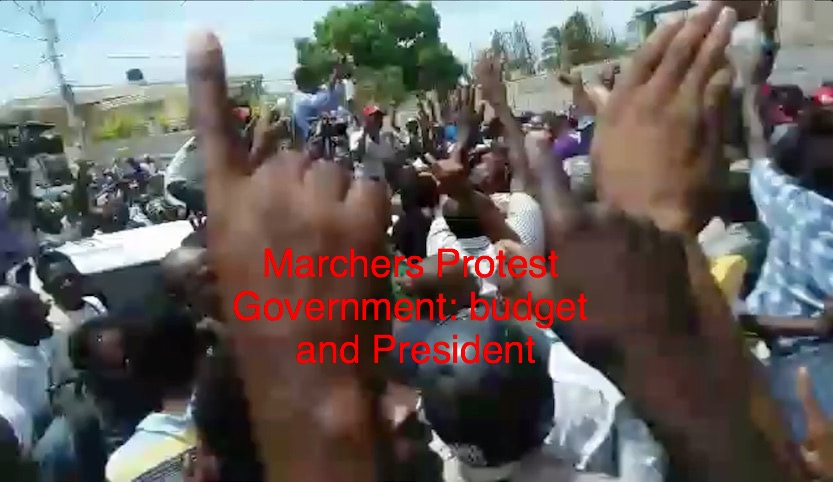