You can now donate online to HHE by clicking the icon above. NOTE: C-19 has forced us to cancel fundraising events so we now depend on online donations.
Pour une version en français, cliquez ici "Crise"
To read "US-Backed Haitian government agents accused of conducting massacre" by Jeb Sprague, Dec 19, 2018,  click HERE
Listen to Kevin Pina on  Twitter & Flashpoints​ 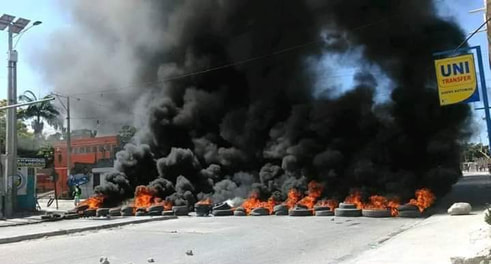 #5. "Operation Lockdown" 2/16/19
​
This past week, preceded by months of massive demonstrations all over Haiti, protesters shut down major cities by blocking main roads with burning tires. The protests began in July of 2018 when the government of Haiti announced it was going to raise the price of gasoline. The economic situation had already resulted in lack of food and jobs. Critics accused the government of corruption especially the misuse of $2 billion from the sale of gasoline that was provided at low prices from Venezuela. ("PetwoKaribe" Caribbean gas in Creole) They called for the resignation of both President Jovenel Moise and Prime Minister Jack Guy Lafontant.

In July of 2018 both The Conference of Catholic Bishops and the Protestant National Federation joined forces with the protesters and obtained the resignation of the Prime Minister. This is the first I've seen an interfaith action like this! The government then withdrew the rise in gas prices that the IMF (International Monetary Fund) had pressured Pres. Moise to institute.  (Nouvelliste) However, as people continued to suffer from lack of food and jobs and an unresponsive government, protests grew and led last week to "Operation Lock-Down" that halted all normal life, including canceling the popular "Mardi Gras Carnaval". Schools, businesses, markets have all been closed. Those who need hospitals/clinics have suffered from the blockade. Critics of Pres. Moise, who had remained silent and uninvolved this past week, have called for his resignation. The Conference of Catholic Bishops called on the government to listen to the message of the people of God. They cited the gospel of Matthew 8 v. 25, "Save us Lord, we are about to die."  Finally on Feb. 15 President Moise broke his silence but has refused to resign, blaming drug smugglers for the disorder. 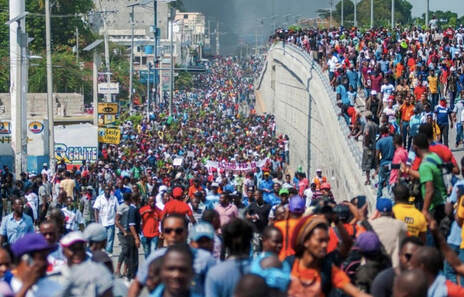 #4 Non-Violent Protests?
​As in previous massive protests the police have killed innocent people and certain violent people have engaged in the destruction of businesses. The pollution from burning tires is deadly. However, for the most part up to now, tens of thousands of non-violent marchers have engaged in classic non-violent protests including women and children. (See photos above and below) In Dec. 2015, I participated in such peaceful large marches up Delmas Ave. to Pétionville while the press was decrying violent mobsters.  Marching and then riding on a motorcycle, I saw no violent demonstrators. Looking at pictures of this past week they also look non-violent. Of course there always will be violent people who commit damaging acts even as the majority are simply putting their bodies on the line publicly for reform.

#3 Previous Protests and Special Election
Now foreign governments, though, have condemned the "mob violence" of these current demonstrations and they uphold elections as the only way to change government.  Pres. Moise himself was elected in a special election in 2016 when his predecessor Michel Martelly was forced to resign by protesters. (See the Atlantic) Pres Moise was handpicked by Martelly. A special committee of parliament organized the special election. Pres. Moise is in the 3rd year of his 5 year term ending in 2022.Parliament could organize a special election as for Pres. Martelly. The "Core Group", a group established in 2004 to counsel Haiti has said in the fall of 2018 that it "rejects the acts of violence...:", but also encourages dialog. These non-violent, persistent, massive demonstrations leading to the "Lock Down" solidly show the absolute necessity of changing things that have not been changed during the last couple of administrations. Of course, if the U.S., Canada, and France would put more pressure on the government, this change would become more possible.  This seems unlikely.
#2 A Neo-Duvalieriste Massacre?
Very notable, though, are recent reports that implicate the government in the brutal massacre of more than 50 people on Nov. 13, 2018 in the politically historic section of La Saline in Port-Au-Prince.(La Saline is the site where in 1988 Fr. Jean-Bertrand Aristide was attacked by the Port-Au-Prince mayor, Franck Romain, graduate of the School of Americas, leader of the Tontons Macoutes, while Fr. Arisstide was saying Mass at his St. Don Bosco Church.) These reports were that the La Saline massacre was a war between gangs.  Now these reports have been contradicted by witnesses and human rights groups. They show that it isn't just mobsters creating violence. ( RNDDH) Other reports say that government-supported gangs killed victims while sleeping, dismembered their bodies  and threw their parts into pits for dogs and pigs.

#1 Words of Mr. Haïle Noël - Principal of St. Mary Magdalene
The principal of our school, St. Mary Magdalene Classical Center, Mr. Haïle Noël (picture, left), reported to me last Tuesday. Then he said today: "Hello, Tom. I am fine where I am.  The situation is really complicated in Haiti the last 6 days.  There is no way to use the streets. The school is not open.  There are no violent scenes in Grand Ravine right now, but the situation is very difficult, complicated...We are totally besieged.  We can't go out.  It is catastrophic. I have never seen anything like this since I was born!"