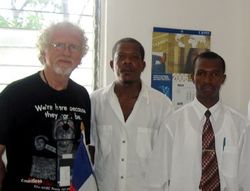 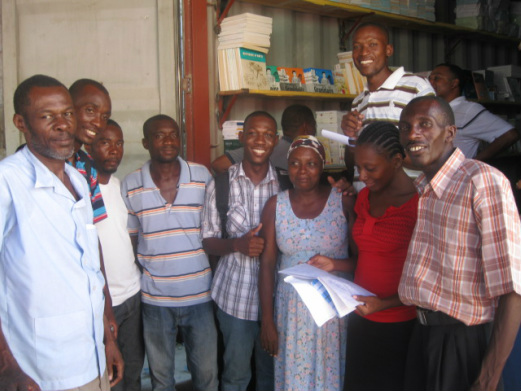 THE GRAN RAVINE COMMUNITY HUMAN RIGHTS COUNCIL - GR/CHRC was formed in Aug. 2005 in the wake of  politically motivated massacres and house burnings after Pres. Jean-Bertrand Aristide, first democratically elected president of Haiti was removed by the United States and other countries.  With free legal assistance from AUMOHD (Haitian) and HURAH, Inc. (US ) these non-violent, non-partisan citizens began advocating for basic human rights for their community.

In spite of further massive violence in 2006, the brutal murder of #2 Pres. Esterne Bruner,  the GR/CHRC has continued with #3 President Frantzco Joseph (middle, 5th from left) and #4 President Jean-Ernest Point-du-Jour (picture 2nd from left).

With the help of Seton Hall University Law School and Haitian Attorney, Evel Fanfan, the GR/CHRC has lodged a complaint against the Government of Haiti with the Interamerican Human Rights Commission for reparations to cover the damages of '05, '06.  Justice is slow but these citizens are determined to raise their community above violence and party politics to a level of basic human rights.  They called for a scholarship program for their most impoverished children as the most important need even after the earthquake of Jan. 2010. More than 500 students applied.  Thus Hope For Haiti: Education-HHE, began in Sept. '10, 2010 funded by the St. Columba Haiti Ministry  with 170 children. In year 3 we had to reduce our scholarships to 100.

President Point-du-Jour visited the Hope For Haiti: Education (HHE) project in May 2013 (see section "Year 3" ) and received a commemorative plaque naming the HHE project, The Esterne Bruner Scholarship Program.   See slide show below to see pictures orienting supporters to Haiti and Grand Ravine with its history.
CURRENTLY Hope for Haiti:Education-HHE raises funds to sponsor 50 students to attend St. Mary Magdalene School in the Grand Ravine neighborhood of Port-Au-Prince, Haiti.  A second school, St. Bernadette, in the Martissant section of Port-Au-Prince is funded by a donor for 18 students.  HHE  is a project developed in 2010 by the Haiti Ministry at St. Columba Catholic Church in Oakland, California  in collaboration with the Community Human Rights Council of Grand Ravine (CHRC-GR), in Port-au-Prince, Haiti.  The CHRC-GR was dedicated to peaceful, non-partisan advocacy for human rights.  It was formed in 2005 after a politically motivated massacre with the services of AUMOHD, a Haitian human rights advocacy group, and HURAH, (Human Rights Accompaniment in Haiti) organized by Tom Luce in Vermont in 2004.