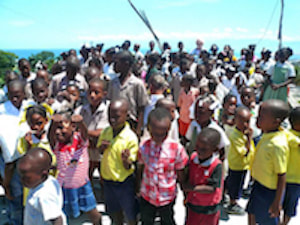 2010 YEAR #1: HHE began working in Port-Au-Prince, Haiti, in the school year 2010-11 (see picture at left) with the non-violent, non-partisan, community, voluntary group, the GR/CHRC, the Grand Ravine Community Human Rights Council.  The GR/CHRC came into being in 2005 after a politically motivated massacre of innocent residents by gangs aided by the new Haitian government that had replaced the first democratically elected Haitian President, Jean Bertrand Aristide in 2004.  Tom Luce, a member of HHE, had been involved in the creation of GR/CHRC which readily agreed to collaborate with us, asking us for scholarships for their most impoverished children at-risk of living in the streets and worse even with all their other dire needs after the 2010 earthquake. With the GR/CHRC we were able to work with a local "community model", working with religious, educational, civic leaders rather than working through a top-down international organization. We started with 170 complete scholarships (tuition, supplies and uniforms) involving 5 neighborhood, interfaith schools including the Catholic school, St. Mary Magdalen. In year #3 we had to reduce our 170 to 100 scholarships. We entitled our program, the "Bruner Memorial Program" in memory of the 2nd President of GR/CHRC, Esterne Bruner, who was brutally murdered for his work. 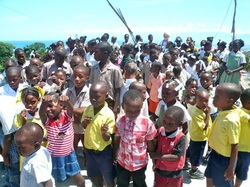 A gala celebration was held at the Bro. Mareus school, one of our 5 scholarship schools on June 16.  St. Columba worked with the human rights group, Hurah, and its representative, Gentilhomme Jean-Gilles, to help provide the refreshments on the 100+F day.  Mr. Jean-Ernest Point-du-Jour, President of the Grand Ravine Community Human Rights Council organized the celebration at one school in order to avoid too much publicity, a constant problem in this crime-prone section of town.
Click on the picture of the children on the roof of the Bro. Mareus school to see a video/slide show of the celebration.
For another copy of this video and more pictures click HERE 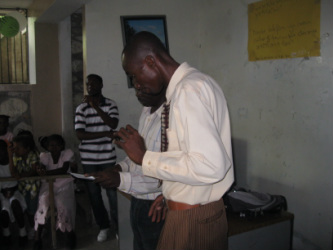 This year even though we could not pay all the tuition until the end of the year, all students were still allowed to stay in school.  The schools cared for all our students very well.  A celebration was held in July at the Orion Institute for all 170 scholarship students.  Music and plays were presented.  Parents and children spoke of their great appreciation to the St. Columba Haiti team.  The fact that many of these students had never been in school was underscored.

Mr. Jean-Ernest Point-du-Jour (left) is preparing to speak to the student body and school teachers and administrators thanking St. Columba, telling the parents how happy he is to have had the privilege with the CHRC leaders of administering the scholarship program for the happiness of the community completing two years of great progress. 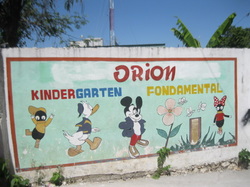 This year had to begin with a great sadness, the loss of 70 students for lack of funding.  Making the choice fell to the volunteer team of the Grand Ravine Community Human Rights Council  We have succeeded in getting better control of monthly payments.  We're now up to February.  Already an interested funder is working on a funding method to bring our numbers back up.
Here is the Orion School, Kindergarden-Primary Level .  One of our 4 schools this year.  We have 20 students there.  Our volunteer, Gentilhomme Jean-Gilles went there Feb. 19th to take pictures and greetings from the students to St. Columba!  These are the smiling students in the picture below. 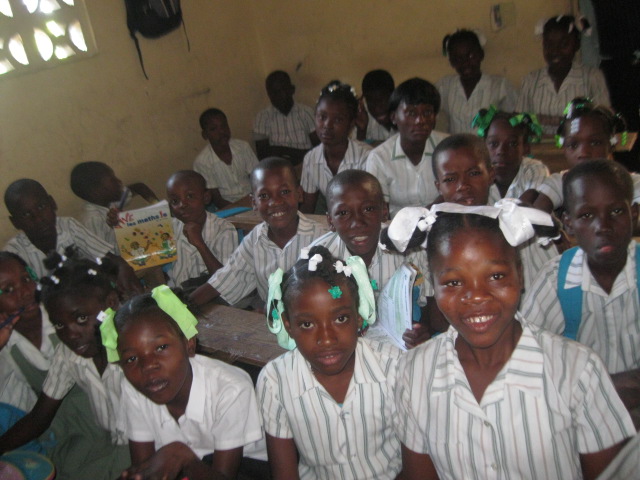 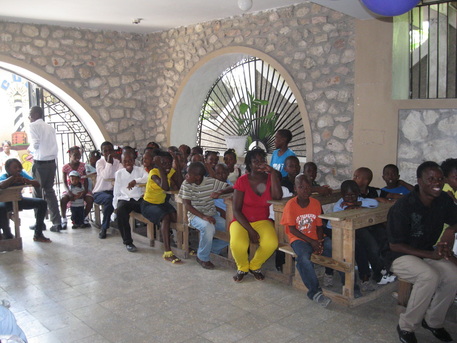 The Orion school auditorium (left), one of five we send students to, held our 170 students this festival. They sang songs, performed theater pieces.  "Our very sincere thanks to St. Columba!"